Years and a lifetime or two ago, a good summer weekend used to involve a bike ride “in the country,” a drive to Inman Square for dinner at East Coast Grill and a nice walk to Christina’s for ice cream, and a walk to Harvard Square for a few hours. Now, what used to be “in the country” is actually closer to Boston than where we live, the only commercial place we could walk to is the local convenience store by the highway, and we have to drive to Dairy Queen or Dairy Joy for our local ice cream.

However, as much as I sometimes miss those days,  at this point in my life I wouldn’t trade it for the kind of weekend we just had.

It started Friday night. Weekends normally do, I suppose, but this was a special Friday night. We moved Thalia’s crib into Siena’s bedroom and had them sleep together for the first time. It was a rough first night: Thalia was shrieking with joy, jumping up and down, taking off her sleep sack, and generally annoying Siena, who just wanted to get to sleep. We eventually pulled Siena out for a half hour to let Thalia get to sleep, and then sent Siena back in. That didn’t happen until about 10 PM. Saturday night was better. They chatted to each other until around 9 PM, but never required any intervention. Tonight, they got quiet by 8:50, so a little better each night so far! It’s great to see how excited they are at this early stage of this process, but all this conspiratorial chatter may be foreshadowing the challenges we’ll have ahead with two daughters.

Saturday the girls slept in, thankfully after their late night on Friday.Mama took the girls to get their hair cut and shoe shopping at the mall, while I did a variety of outdoor tasks, like pulling bad and rotten apples from some of our apple trees. Once they returned, we all went swimming before and then again after lunch. Once Thalia went down for nap, we gave Siena an early birthday present: Her first bike! She immediately started trying to balance on it with Mama’s help.

Of course, she did try to do a little too much, so we caught her first fall-resulting-in-screaming on video:

Barley spent most of the day outside. Can you spot her in this shot of the front our house? She loves the shade:

For dinner we went to, you guessed it, Not Your Average Joe’s, and the girls at their usual pizza and ice cream. Given that it was a Saturday instead of our normal Sunday, I was very confused about whether the next day was a weekend or a work day.

Around 11, Siena’s friend Zoya and her family showed up for a visit, and we all went swimming again. This was a weekend of firsts for Siena; she started on her bike, she jumped into the pool with no one holding on to her for the first time, and she went all the way underwater for the first time (this immediately followed the unassisted jump into the pool, and was not in Siena’s plan).

We had a delightful lunch, and then served Thalia her cake (this being a surprise to Zoya’s family). After they left, Thalia went down for nap, and Siena did more bike riding and swimming. Once Thalia woke up, she got to open her presents:

We loved how excited she was to get a book. She’s her mother’s daughter!

We also watched the bulk of the Women’s World Cup Final (the good parts, up to when the US went up 2-1), and then did the usual dinner, bath, and bed thing.

The girls were exhausted, and just like with dogs, a tired girl is a good girl.

I’m reminded of the Calvin and Hobbes book, which I look forward to introducing to the girls someday: 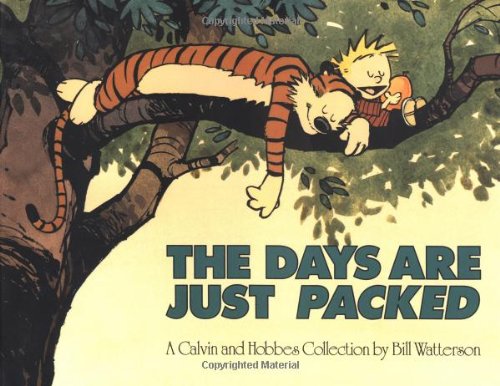